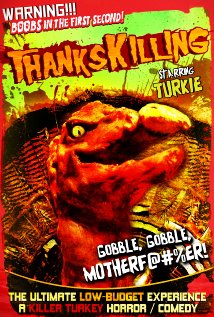 Darlings, I was recently asked to recommend a Thanksgiving-themed film (preferably something available on Netflix Instant) that would be good for viewing with extended family over the long weekend.

Good for viewing with the family? Well, I suppose that depends on your family, my dears, or how quickly you would like them to remember that they wanted to beat traffic home. But I am never one to shirk my duties as horror hostess here at TYoH, so here are three easy-to-find horror films with a decidedly Thanksgiving feel. As for family viewing, well…two out of three isn’t bad, darlings.

With a tagline like “Gobble Gobble, Motherfucker,” you should already know what you’re getting into with ThanksKilling. If not, the poorly-shot, extended scene of a topless pilgrim getting ax murdered by a possessed turkey in the first 5 minutes should erase all doubt.  This movie sinks past bad to just achingly, hilariously ridiculous as 5 college students partying over the Thanksgiving holiday break try to escape from a possessed and highly homicidal turkey.  Described by the Boston Globe as “cheerily awful,” this film is basically not for you if you are either 1) without a sense of humor, 2) describe yourself as having good taste, or 3) sober.  Available on Netflix Instant, iTunes, and Amazon on Demand.

This is ThanksKilling with a larger budget. Since the budget for ThanksKilling was $3,500, that’s not really saying a lot. And yes, ThanksKilling did skip its own sequel and went straight to ThanksKilling 3. Why, you ask?  If you’re thinking this hard about ThanksKilling, it probably isn’t the film for you, darling. Available on iTunes, and Amazon on Demand.

3. Poultrygeist: Night of the Chicken Dead

Poultrygeist, a classic bit of Troma entertainment, is the story of a fast food chicken joint inadvertently built on ancient Indian burial ground and under attack by chickens. Chickens possessed by zombie demon Indians. And also there’s Ron Jeremy. Basically, this is ThanksKilling 3 with 40 years of practice. But what can I say? I have a soft spot for that Lloyd Kaufman. Available on Netflix Instant, iTunes, and Amazon on Demand.

– A Long Procession of the Dead: Cockneys vs Zombies Trailer

– Gonna Lumberjack You Up: Bunyan Trailer