His Target is Santa Claus: 1983’s “Don’t Open Till Christmas” 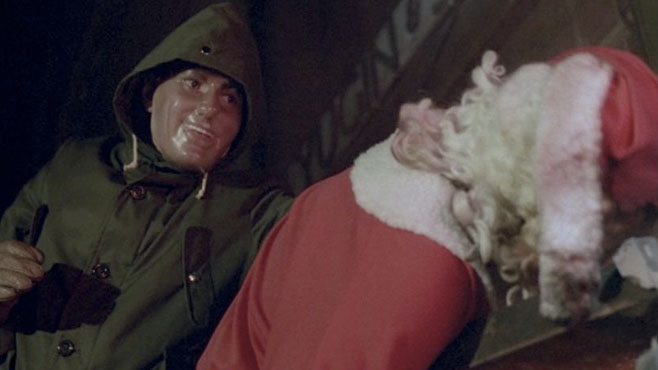 The movie is supposed to be about someone murdering Santas in London. Now, I am no ace detective, but I am going to go out on a limb and say that as soon the news announced the murder of Santa number two, the odds of me continuing to wear a Santa suit would drop to nothing. They don’t explain in the trailer (which is odd because it is as long as the movie itself probably) but maybe the killer went on a Santa killing spree all in one night, which would mean that you could probably get quite a few before anyone caught on. I wanted the killer’s identity to be such a terrible mystery that I would need to solve it. It did baffle Scotland Yard, after all. But then I realized that the act of watching the trailer had probably given me some sort of illness so watching the whole movie would more than likely kill me.

I think the only thing that needs to be said about this trailer is that it has naked boobs in it and YouTube doesn’t even care.  Seriously, the human beings they hire to check for those things watched for five seconds and then probably had a seizure from how stupid it is. And the whole thing is so badly lit that whatever robotic nipple picker they employ missed it as well. So, if you are brave enough, you can take a crack at the trailer.  It’s the least you can do *coughs* since I already did.  Also you might want to watch it because of the naked boobs. This is the internet.  Where else are you going to find nudity? Merry Christmas and if you do watch the trailer, tell me your fave part.  I know mine!

Like Loading...
‹ Away in a Madhouse: A Collection of Cthulhu Carols
Have Yourself a Merry Little Christmas…It May Be Your Last: 11 Holiday Haunts ›