Far to the north, just below the Artic Circle, lies a land of steaming volcanos and eeriely lit skies. As winter descends in the northern hemisphere, night settles on Iceland, swathing the island nation in darkness for more than twenty hours per day. In this time of persistent midnight, myths loom large as shadows full of menace stride across the landscape. Of particular interest are the peculiar creatures of Christmastide in Iceland, alarming echoes of a pagan past that have been cheerily embraced by locals and tourists alike. Standing out among the compendium of fey beasts is Jólakötturinn, The Yule Cat, a great black grimalkin who slinks down from the night to gobble up children who do not have new clothes for Christmas.

“When Christmas Eve was lighted
and the cat looked inside
the children stood straight and red-cheeked
with their presents.

He gave a wave of his strong tail,
He jumped and he clawed and he hissed.
Sometimes up in the valley,
Sometimes down by the shore.

He roamed at large, hungry and evil
in hurtfully cold Christmas snow
and kindled the hearts with fear
in every town.

If one heard a pitiful “meow”
Something evil would happen soon.
Everybody knew he hunted men
and didn’t want mice…”

First mentioned in the 19th century, the Jólakötturinn fulfilled the folkloric function of encouraging workers to complete their processing of the autumn wool collection before the start of the Christmas holidays. Lazy children in particular were warned against að fara í Jólaköttinn, “to end up in the Yule Cat.”  This concept of the Yule Cat as devourer of men was popularized by Icelandic poet Jóhannes úr Kötlum in his poem Jólakötturinn. Since then, the Yule Cat has been widely accepted as part of the local holiday tradition, even appearing in a musical rendition of Jóhannes úr Kötlum’s poem by Icelandic alt rock singer-songwriter Björk. 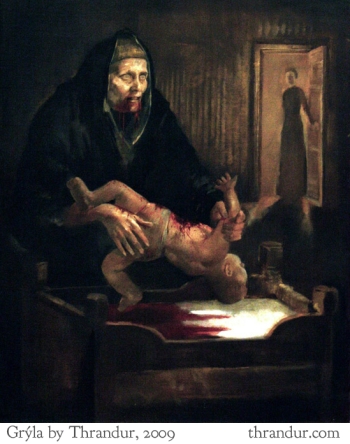 Over time, the Jólakötturinn has aligned with other figures of Icelandic holiday folklore, often said to be the pet of the insatiably hungry giantess Grýla, who ventures down from the mountains at Yuletide to gather up disobedient children and cook them into a stew.

Dating back to a 13th century Icelandic edda, Grýla lives with her husband Leppalúði in the sinister Dimmuborgir (“dark castle”) lava fields. Also in residence are Grýla’s sons, the Jólasveinarnir or “Yule Lads.” These thirteen lads, each with their own bizarre idiosyncracy, appear in the days before Christmas to harass Icelanders and, some say, to find more naughty children for Grýla’s pot.

Of course, these tales have been tamed in modern times since a 1746 edict that banned using stories of Grýla and her family to scare children, turning the Yule Lads into innocuous Santa Claus figures who leave presents for good children and rotten potatoes for bad ones. These mischievous lads are now so embraced by the community that they grace everything from buildings in downtown Reykjavík to the national airline during the holidays.

But in the long, cold, hours of night, these ancient tales of horrors who live in the mountains are harder to dismiss, as the wind howls like a yowling cat, hungry and seeking food. If you are feeling particularly bold, look out for the arrival of tonight’s Yule Lad, Kertasníkir Candle-Stealer, known for following children and eating their candles, those prized, shining shields against the long Icelandic night. If you wait up for Kertasníkir tonight, perhaps you should put on a new bit of clothing first…just to be safe from any other creatures on the prowl this Christmas Eve. 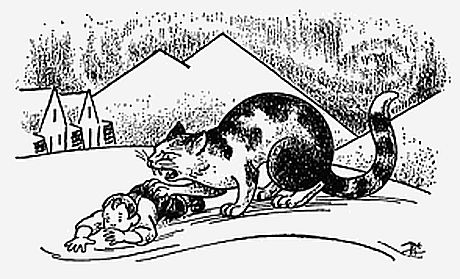 To learn more about the Christmas creatures of Iceland, read articles by The Reykyavik Grapvine and Christmas in Iceland.  For more Icelandic art, visit Hugleikur Dagsson and Þrándur Þórarinsson.