Home › Art & Inspiration › History (Haunted and Otherwise) › Check Out Anytime You Like: The Macabre History of LA’s Hotel Cecil

Check Out Anytime You Like: The Macabre History of LA’s Hotel Cecil 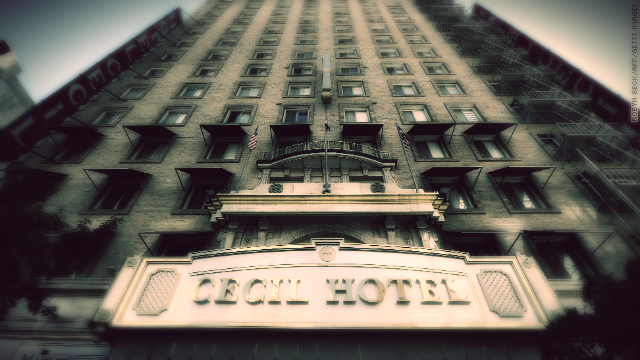 At the beginning of the 20th century, Los Angeles was a city on the rise, “destined to become the most important city in this country, if not the world.” By the 1920’s, population had skyrocketed to nearly one million people, steamships directly connected Los Angeles to Japan, and newly-founded Hollywood studios were producing 80% of the world’s movies. It was to this tide of optimism and prosperity that Hotel Cecil opened its doors in 1927, the same year the first feature-length talking picture, The Jazz Singer, premiered.

Catering primarily to business travelers, Hotel Cecil shared a corner near 7th and Main Street with the bustling Pacific Electric Building subway station in downtown Los Angeles, promising a warm welcome and “good solid comfort” at each of its 700 rooms, starting at one dollar per night. But the bold confidence of the 1920’s was not to last. With the lingering impact of the Great Depression and the rise of the LA freeway system, commerce in downtown Los Angeles withered and died. Main Street fell rapidly into decline, succumbing to growing crime and violence from the nation’s largest Skid Row, located just one block east of Hotel Cecil. By the 1950’s, the hotel had gained a reputation as a residence for transients in a bad part of town, with a growing pedigree of murders, suicides, and assaults.

Surely, though, any hotel with a nearly 90 year history will have its share of dismal dealings.  And yet, the documented events at Hotel Cecil have a more sinister note, more malaise and misery, as it is linked time and again with suicide and murderers, beginning in 1950 when escaped murderer Raymond D. Hair stayed at the hotel under the pseudonym J. S. Royster, eluding the authorities for a month until he was recaptured at Hotel Cecil on January 12. Multiple suicides followed, with lodger Helen Gurnee leaping from a window on October 22, 1954, landing on the hotel marquee seven stories below, Julia Moore jumping from an eighth floor window on February 11, 1962, and Pauline Otton who, following an argument with her estranged husband on October 12, 1962, fell nine stories to the sidewalk below, landing on pedestrian George Gianinni, killing both instantly. In 1964, Goldie Osgood, known as the “pigeon lady of Pershing Square,” was a retired telephone operator living in Hotel Cecil. Earning the name “Pigeon Goldie” for her care and feeding of the local pigeons, Goldie was attacked and strangled in her room on June 4. Her murder was never solved.

Cecil’s most infamous resident lived in the hotel in 1985, when Richard Ramirez moved in for several months during his spree of serial home invasions, sexual assaults, and murders that terrorized the residents of Los Angeles and earned him the media appellation “The Night Stalker.” Ramirez stayed at least six weeks at the Hotel Cecil, living on the 14th floor in a room costing $15 per night, using it as a base for his gruesome attacks throughout the greater Los Angeles area before his capture later that year. The Hotel Cecil’s quota for serial killers did not remain lacking for long, though, as Austrian killer Jack Unterweger moved in just over five years later. First convicted of murder in 1974, Unterweger was released from prison as a model of rehabilitation, while secretly resuming his sinister activities nearly immediately. Hired to write about crime in the United States, Unterweger took up residence in Hotel Cecil for five weeks in 1991, murdering three prostitutes and dumping their bodies nearby. Some speculate that he met his victims (Shannon Exley, Irene Rodriguez, and Peggy Jean Booth) on the fire escape, on their way to late-night assignations at the hotel.

The hotel’s long association with murderers did not end with Richard Ramirez and Jack Unterweger. During the largest jailbreak in Los Angeles County history, accused murderer Eric Reed fled to the Hotel Cecil in 1995, where, in striking synchronicity with Raymond Hair forty-five years earlier, Reed hid until his recapture. Due to the hotel’s transient population and proximity to Los Angeles’ Skid Row, described by Hal Boyle as “the Bowery of the West…the poor man’s underworld; a cross-section of American futility, the place where men who have lost hope go after they have jettisoned their dreams,” death and violence were such quotidian occurrences that few made headlines. And yet, the hotel’s reputation was well enough established that the New York Times referred to Hotel Cecil in 2003 as “a common stop on the coroner’s route,” leading some to claim the hotel is “one of most haunted places in all of Los Angeles.”

Still, optimism bloomed when, in 2007, Hotel Cecil was was sold and partially renovated, aiming to take advantage of growing urban renewal in downtown Los Angeles as a hip, budget tourist hotel. Although reports of dim hallways, odd odors, shady residents, and insect infestation have dogged the property, the rebranding was moderately successful until January of this year, when 21 year old Canadian student Elisa Lam checked into the hotel, then abruptly disappeared.

Flyers were posted throughout Los Angeles. Police searched the hotel with dogs, finding nothing. Close circuit video of the elevators was released, showing Elisa pushing buttons in a still elevator, peeking out, pulling back as if to hide, then going back into the hall and gesturing oddly, as if playing a bizarre game of hide and seek with an unseen figure. Finally, after three weeks, her body was found in one of the four 8-foot tall water tanks on the roof of Hotel Cecil, after guests complained of low water pressure and unpleasant odors from the hotel’s bathing and drinking water.

Despite the alarming video and the difficulty a guest would have accessing the locked roof and tanks, Lam’s death was ruled an accidental drowning and the case has been closed. Already, conspiracy theories, paranormal explanations, and comparisons to the 2002 film Dark Water are swirling around the strange story, adding yet another dark and  disturbing chapter to Hotel Cecil’s troubled history. If you feel like the Hotel Cecil is your cup of tea, the hotel at 640 S. Main Street remains open and is accepting reservations for the low price of $60 per night. The staff swears the water is now safe to drink…just make sure to keep those doors locked, kittens.

Visit In SRO Land for more on the history of the Cecil Hotel, and Uncanny.net. for more historic photos of downtown Los Angeles.

– And Still There Sits a Moonshine Ghost: The Legend of Penny Castle

– Gothic Gloom in the Heart of Paris

– I Dreamt of a Black Sea at Night: The Sinking of the Titanic