Venom was a powerful alien symbiote in the Marvel universe that adapted and enhanced the powers of its human hosts, most notably Spider-Man.  She-Venom appeared in The Amazing Spider-Man #375 as Ann Weying, ex-wife of then-Venom Eddie Brock.

Ann initially merged with the Venom symbiote to save her life, but ultimately came to a bad end in an effort to avoid the dark things the symbiote inspired her to do. 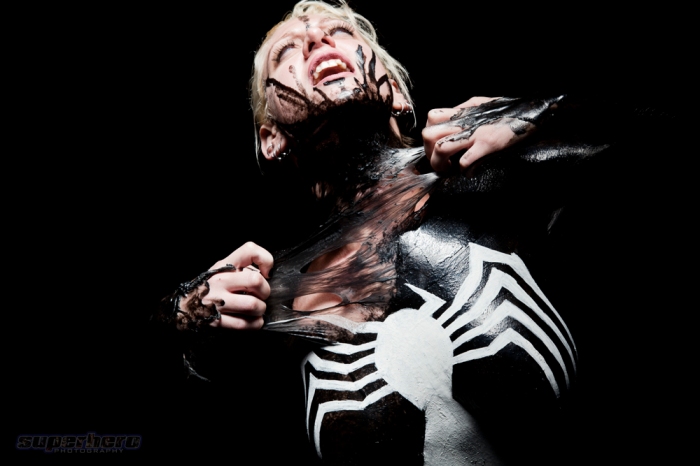 If you’d like to see more photos of model Freddie Nova in liquid latex as Venom – and really, who wouldn’t? – go see the complete gallery at Superhero Photography. While you’re at it, darlings, it’s worth taking a few moments to peruse Adam Jay’s portfolio of other fantastic cosplay.  Surprising no one, I’m personally rather a fan of the Girls that Geek collection.

– And the Blood Came Out Like a Bird: Gouged Eye Makeup Tutorial

Like Loading...
‹ Blood, Boneyards, and Other Scary Things
A Long Procession of the Dead: Cockneys vs Zombies Trailer ›