El Día de los Muertos: When the Souls Come Back 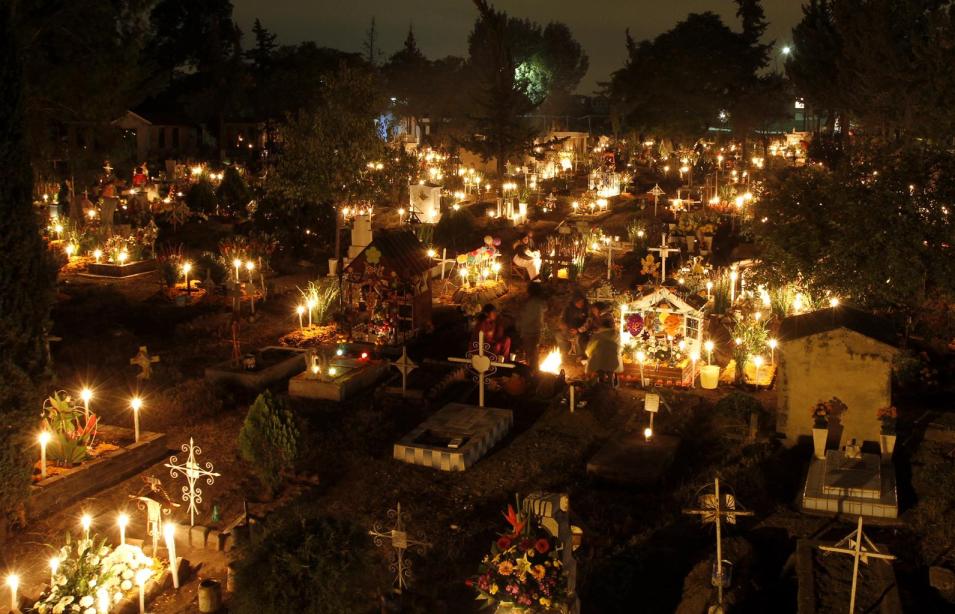 Celebrated on the first two days of November, the grinning skulls and festive funerary processions of Día de los Muertos are often juxtaposed with the adjacent holiday of Halloween. However, while Halloween traditionally embraces all things dark and spooky, Día de los Muertos is a celebration of those who have gone before, a cultural recognition that dead does not mean departed. Combining the Catholic traditions of All Saints and All Souls Day inherited from Spanish missionaries with indigenous Aztec ritual imagery such as skulls (traditionally used as trophies and symbols of death and rebirth), this holiday was recently recognized by UNESCO as an “oral and intangible cultural heritage of humanity.” In communities across Mexico, Latin America, and the United States, Dia de los Muertos is celebrated by visiting cemeteries and caring for the graves of family members, costumed parades, and the building of altars to guide back the souls of the dearly departed. Rife with Catholic and pagan symbolism, these beautifully intricate altars are decorated with flowers, candles or lights, and ofrendas (offerings) to the dead of their favorite things in life. Skulls are prominently displayed, including the iconic sugar skulls, which are marked with the names of the dead and eaten by relatives or friends.

In recognition of this beautiful and fascinating holiday, photojournalist and travel writer Enrico Martino has compiled a compelling collection Dia de los Muertos photographs in a mini documentary called El Día de los Muertos: When the Souls Come Back. Captivating, lovely, and at times haunting, you can watch the short film in its entirety below. Enjoy!

Visit Latin Times learn more about the traditional symbols of a Dia de los Muertos alter or KPCC for guidance on building your own.  For more by Enrico Martino, visit EnricoMartino.com.

– Dark Clouds Will Gather ‘Round Me: Town of Ghosts

– A Hornet Tests my Sculptured Skin: Horror as Art

Like Loading...
‹ Silent Sundays: Día de los Muertos (2009)
If Only I Could Remember These Dreams: Photography by Norman Reedus ›