Home › Art & Inspiration › Scary Stories to Watch in the Dark, and Other Horror News from Around the Web

Scary Stories to Watch in the Dark, and Other Horror News from Around the Web

Kittens, we are hard at work putting together a holiday shopping guide for the horror lover in your life (you can find last year’s list here to get you started). In the meantime, here’s a little roundup of horror news from around the web.

– The classic children’s horror series Scary Stories to Tell in the Dark is being picked up for a feature length film, according to The Hollywood Reporter.  Helmed by Patrick Melton and Marcus Dunstan of Piranha 3D and the later Saw films, the film will turn a selection of stories from the series into nightmares come to life that a group of kids must face to save their town. While I’m willing to see where they go with this, everyone knows that it was the horrifically disturbing illustrations by Stephen Gammell that made the series so terrifying.

– In other entertainment news, Jenji Kohan, creator of Weeds and Orange is the New Black, is developing a period drama for HBO focusing on witches in Salem. What can we say, darlings? Witches are hot right now.

– For real life horror, there’s a town in Slovakia where superstition has flared over a river that turned to blood overnight.  Five hundred miles to the north in Berlin, cemetery cafes, serving coffee and tea surrounded by the graves of the dearly departed, have begun growing in popularity throughout the city and beyond. I hope they offer skull and bones sugar with that.

– Finally, in holiday horror news, the Embassy of Norway’s annual Christmas tree display at Union Station in Washington, D.C has been decorated to honor the 150th birthday of Norwegian painter Edvard Munch this year with 700 ornaments bearing the iconic howling face from Munch’s painting The Scream. Click over to All Things Considered for the full story, and have a marvelously spooky Thursday, sweetlings! 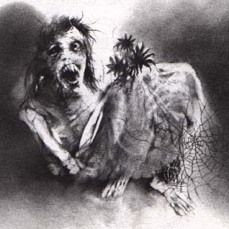 – Like Something Strange, Undreamt-of: The Nightmare Illustrations of Stephen Gammell

– Beheld with Burning Eyes: 5 Horror Trailers on the Horizon