Home › Art & Inspiration › White as Snow and Red as Blood: The Art of Snow White

White as Snow and Red as Blood: The Art of Snow White

Just over 200 years ago, brothers Jacob and Wilhelm Grimm published their first volume of 86 stories culled from European folk tradition and memories. This collection of fairy tales, criticized as too dark and violent for children even upon its first release, included a well-known tale of a young girl of great beauty, white as snow and red as blood, the object of intense jealousy by her wicked mother.

Believed to date to at least the 1500’s, the story of Snow White (Sneewittchen or Schneeweißchen to the German Grimm brothers) was popular across Europe, with similar tales known in Italy, Greece, Armenia, and Scotland (an interesting version that ends with a revived Snow White in a polygamous relationship with her Prince). Although this tale has parallels to many common folk motifs, there is something about Snow White, a certain darkness that has lingered through its many retellings and modernizations, a shadow that is cast across the artwork inspired by this grim fable.

Over time, some of the more ghastly elements of the story of Snow White have disappeared or softened, as her mother became her step-mother and no longer attempts to satiate her jealousy by eating her daughter’s heart and entrails, nor is she punished at the tale’s conclusion by being forced to dance in a pair of burning shoes until she dies. Yet the inherent ghastliness of the legend persists, defying even the effect of Disneyfication, as seen in the somber concept art for their 1937 animated version, Snow White and the Seven Dwarfs. 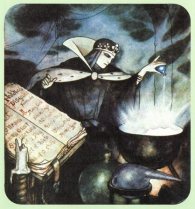 As the first full-length cel animated feature in film history, Snow White and the Seven Dwarfs was a major financial gamble for Disney, taking years of art and concept development. The animation style was influenced by a variety of media, including German expressionist films (and early silent horror classics) The Cabinet of Dr. Caligari and Nosferatu, creating shadowy backgrounds, grotesque transformations, and evil, living trees that menaced and writhed.

This legacy has continued to influence artists in the eight decades since Disney’s Snow White release, most recently with the wickedly elegant Revanna, the dark Queen in 2012’s Snow White and the Huntsman, an influence clearly felt in the gallery below of collected Snow White art and illustration.

A collection of early and modern Snow White concept art can be found at Concept Art World, or visit Animation Tidbits for vintage Disney Snow White storyboards. For more art by Jeff Simpson, visit his DeviantArt page. To see more Snow White inspiration, watch the original 1916 silent film version, or read up on the intriguing historical parallels to the death by poison of young Margaretha von Waldeck in the 16th century.

– If You Go Down in the Woods Today: Evil Teddy Bear Makeup Tutorial