Things That Go Bump in The Night: 10 Things You Might Have Missed in 2014 (Part One)

Every January, as we face the start of a new year, I like to take a moment to welcome all our new readers to the TYoH family. In addition, I owe a big thanks to you, our regular readers, for your ongoing support and participation. Although I don’t always manage to reply to every comment right away, I do read each one and it thrills me to no end that people enjoy the content we put out here at TYoH. Thanks also go to our regular staff writer Acadia Einstein for keeping things interesting around here, and to this year’s visiting writers that brought their unique perspectives on Halloween and horror. This site is a labor of love for all of us and we are happy to have you all along for the ride this year as we begin our countdown to Halloween 2015.

In part one of our 2014 recap, we’re featuring last year’s six most popular posts. Click the links below to get caught up on the spookiest, the weirdest, and the loveliest we featured in 2014, and join us later this week for the rest of the recap!

6. Blue Mustang: The Demon Horse of the Denver International Airport

Read the tale of Blue Mustang, a towering 32-foot tall demon horse guards the entrance to Denver International Airport. First installed as an art piece in 2008 to immediate public objection, the giant electric blue stallion looms menacingly, his glowing eyes and bulging veins in high relief. Following the statue’s involvement in the untimely death of its creator, the four-and-a-half ton cobalt horror known to locals as “Blucifer” has been rumored to be cursed or haunted or both, a fitting addition to the Denver airport’s bizarre collection of disturbing art, controversial construction, and conspiracy theories.

5. And Mine Lippes Blaken: Five Medieval Medical Conditions That Made You Look Like a Zombie 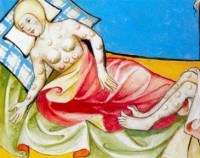 One of our aforementioned guest writers this year, Drew joined us from FrightProps to to speculate on how unlucky it would be to suffer from a bad skin condition during the zombie apocalypse. And where else did people have more truly horrific skin conditions than the dark days of medieval Europe? From plague to the terrifying ergotism known as St. Anthony’s fire, these five medieval medical conditions could cause one seriously unfortunate case of mistaken identity.

4. The Joke’s on You: DIY Harley Quinn Makeup Tutorial

What would our Halloween site be without regular costume and makeup tutorials? We are constantly scouring YouTube for the best video tutorials around and the lovely Julia Graf of MissChevious never disappoints. This DIY video is an elegant, maskless take on DC supervillian Harley Quinn’s classic look and was the most popular tutorial we posted in 2014.

3. Sheeted Memories of the Past: Lukova’s Church of Ghosts

In the Czech Republic, there is a medieval church long abandoned after an ill-omened roof collapse during a funeral service half a century ago. This hauntingly historic edifice was on the verge of closure until a collection of ghosts arrived, shrouded figures gathered silently in the pews. Created by artist Jakub Hadrava, the phantom congregation has drawn tourists from around the world, raising funds for the building’s repair as they sit, shrouded and pensive, in hushed rows.

2. It Carries a Terrible Curse: 31 Memorable GIFs from The Simpsons’ Treehouse of Horror

If you were a kid in the early 90’s, no show did Halloween episodes better than The Simpsons with their annual Treehouse of Horror special.  First airing in 1990, this year marked Fox’s 25th anniversary episode of Treehouse of Horror. Whether you’ve been a fan from the start or have just started watching, click the link to enjoy a video collection of Halloween highlights of the top 13 episodes, and reminisce with a gallery of 31 highly gif-able moments from Treehouses of Horror past.

1. It Was His Devil Twin: The Peculiar Tale of Edward Mordake

Some time before he made his villanous guest appearance on this season of American Horror Story, we had told you the odd tale of Edward Mordake (or Mordrake), an attractive and talented young man with a rare congenital disorder, an unwelcome passenger that whispered things of such horror in the night that poor Edward turned to suicide at the age of twenty-three. Historical references to the chilling story of Edward Mordake go back more than 100 years and are replete with the dark details so popular in gothic horror stories of the time, details that could still raise a chill in even the most jaded of modern readers.

Join us later this week for more of the best of 2014 and in the meantime, get caught up on favorites of years past with our best of 2013 and best of 2012 recaps.  You can also watch our top 5 scariest horror shorts of 2014 here.