Since I am currently in the grip of the big crazy storm in North Carolina I thought it would be a good time to complain about winter. I’m from Maine originally so I know from snow. And everything in winter is just harder.It takes longer to get dressed.  Longer to get to and from work.  It’s always dark.  You can’t tell what people are actually shaped like in bars because everyone is wearing seventeen layers.  There are fewer seats in restaurants because there are giant parkas on them.  Winter sucks.

But it’s worse when someone is trying to kill you.  Hard to run in the snow, no?  So let’s take a look at my top five.

The whole point of this movie is that it is winter.  The vampires come out because in Alaska or Canada or wherever it is dark for a month.  Makes me wonder why someone would live there but what do I know.  As I said, I lived in Maine.  But, in my defense, Maine rules in the 3 months that aren’t winter.

If you want to know why I think it is a good movie, it’s mainly because I find the idea of a ton of vampires running around way scarier than just one guy in a tuxedo.  And because in this scene, if you look closely, you will see a really good touch.  I think anyway.  Can you spot it?

I should mention that if anyone tells me I should watch the original foreign version because it is better I won’t do it and I also won’t believe that it is better.  I watch movies when I am doing something else at the same time usually so I don’t have time to be reading subtitles.  If I wanted to read I would get a book!

If you haven’t seen it, give it a look.  And if you are a snob who won’t give it a chance because it is a remake, BAH! The only movie that should be watched in its original foreign form is Battle Royale.  Oh, and what does it have to do with winter?  Well, it takes place in winter. Look! 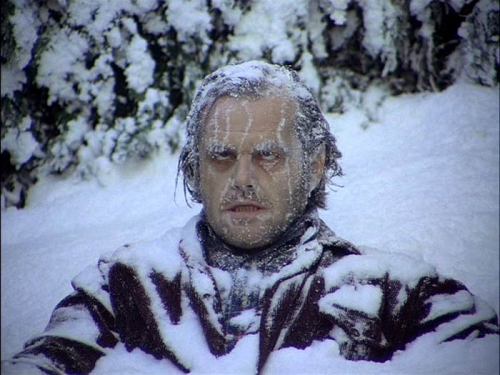 Part of the point of the story is that the Torrance family is isolated.  In fact, I think snow is one of the few ways Stephen King knows how to get people isolated (see later in the list).  But then again, he’s from Maine, right?  And why did Jack die?  Because he couldn’t catch his own kid in a maze.  Why?  Because it was winter and everything is harder in winter.  Danny pulls that in July and he would have been Shining all the way down to the bottom of a ravine. 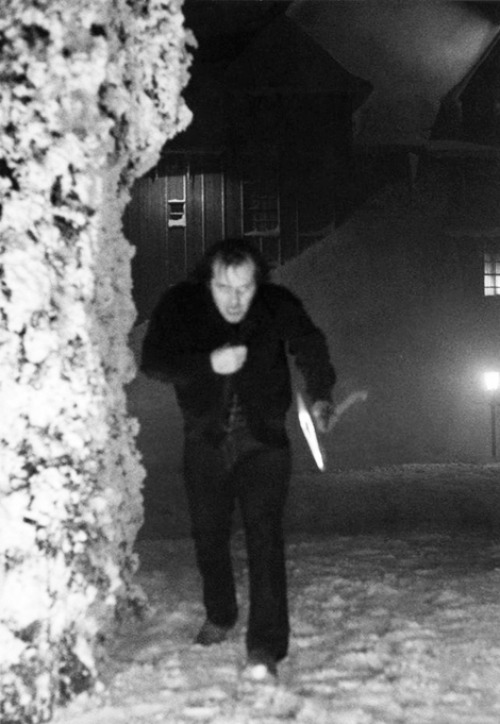 I don’t usually think aliens are scary.  But I think husky dogs are awesome. Knowing these two facts, this movie scares and saddens me. Now, I don’t think it NEEDED to be in Antarctica. Could have been in the jungle or whatever but hey.  Look how bleak this is!

And look what happens if you go outside in the snow without your hat on.  Or without a way to fend off body-invading aliens. 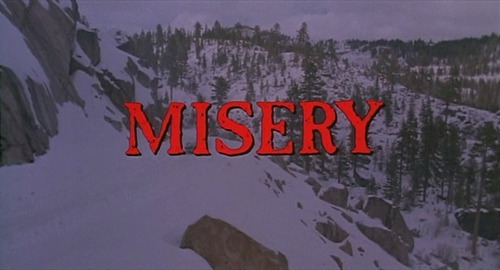 His legs were broken.  He couldn’t get away anyway.  But even though he couldn’t, the snow made it worse.  And Annie was extra crabby because she had to keep going into town and the roads were bad.  And she had this:

And now that I think about it, the snow DID make everything worse.  Because even if Sheldon could have gotten out of the house he would have been crawling around in the snow on his belly and ended up like Jacky Boy up there.  So I guess Stephen King really does know how to isolate people.

Oh, and I am leaving the last gif in because I wish I had a fan.  If I get one, they will be number one!

– I Want to Play a Game: Guess These 13 Holiday Horror Flicks