Home › Guest Writers › Phantoms of the Mind that Walk in Darkness: A Night in Sleepy Hollow Cemetery

Phantoms of the Mind that Walk in Darkness: A Night in Sleepy Hollow Cemetery

John Paulding helped to capture John André. André was the British spy who plotted with Benedict Arnold to give the British plans on how to take over West Point. For that crime John André was hanged in Tappan, New York. Tappan and Sleepy Hollow have a rich Revolutionary War history. West Point is not far from Sleepy Hollow, and there are West Point soldiers buried at Sleepy Hollow Cemetery where I am a docent. My connection with this region is just under the surface and has probably always been there.

About fifteen years ago, I began to imagine myself living in the town of Sleepy Hollow in a little cottage in a semi-bucolic area, as an old writer and part-time hermit. I was enamored with more than just the name. There is that mystique that Washington Irving had given this town back in the 19th century. Though this was after the Dutch had colonized the area, like Irving, who romanticized a time before the English had arrived, my experience there is colored by the history of the Dutch settlers. I have worked at the cemetery for over a year now. I feel like I belong there. I didn’t even have to look for this job – the job came to me. This is a magical place, where tales of ghosts and hauntings persist. To this day, people write about hauntings that occur in the town of Sleepy Hollow in the lower Hudson Valley. 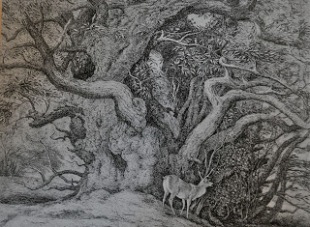 Last year, the day after the strawberry moon that occurred on Friday the 13th, I had a tour with just one couple. Usually I have between 10 and 30 people on my tours. The interior of the cemetery is dark. There are no lights, but the light from the large white moon glowed on the undulating landscape, illuminating the beautiful tombstones and monuments.

During the entire tour I felt very uneasy with this couple. Often I’m in the cemetery alone at night and it’s no issue. The young man was a West Point soldier, built, with tattoos. I should have felt protected, right? But all night I felt the fine hair on the back of my neck and there was cold air against my back. The couple was actually fun, but I kept looking behind rustling trees and at shadows in my periphery, of course without letting them know.

I led them to the vault where the House of Dark Shadows had been filmed. In the movie, this is the home of the vampire, Barnabus Collins. We take visitors inside to see the crypts. While opening “Barnabus Collins’ Lair” with the skeleton key, a bat flew over my head from the overhang, believe it or not!

After the tour the couple drove off and I locked the black gates behind them. I blew out the lanterns that we carry on the tour and put them on the shelf in the creepy room in back of the chapel. The room is small with exposed brick walls and a low ceiling with slanted wood beams. The bell tower is above. In the room along with kerosene lamps, flashlights, and tour-guide back packs, is a granite tombstone that a caretaker had stored for repair. There’s a black stool next to it, cheerfully inscribed with “Happy Halloween” in white.
The wind blew the door of the room back and forth into the stone wall while I put the lanterns away, and filled out my time-sheet. Despite the makings of a wonderful grade B horror movie, I felt completely at peace there, and especially relieved after this couple had left.

I mentioned to someone how I felt with this couple and they suggested that it was the energy of the ghosts of West Point soldiers that had attached itself to the young soldier. I believe that. This is one of a few stories that I have to tell about the cemetery. I’m excited about Halloween as always, and we’ll have lots of visitors at the cemetery this year. Wish me luck — our tours are just about sold out for October already, but still, maybe we’ll see you there!

When not at Sleepy Hollow Cemetery, author Sandee Harris can be found writing at 1800ukillme. She has published two short stories; “Night Terrors,” in Calliope, and “Shredding,” in BlazeVox.