Home › Art & Inspiration › TV & Film › Reviews › Annabelle: Worth Watching if the Alternative is Getting a Paper Cut

Annabelle: Worth Watching if the Alternative is Getting a Paper Cut 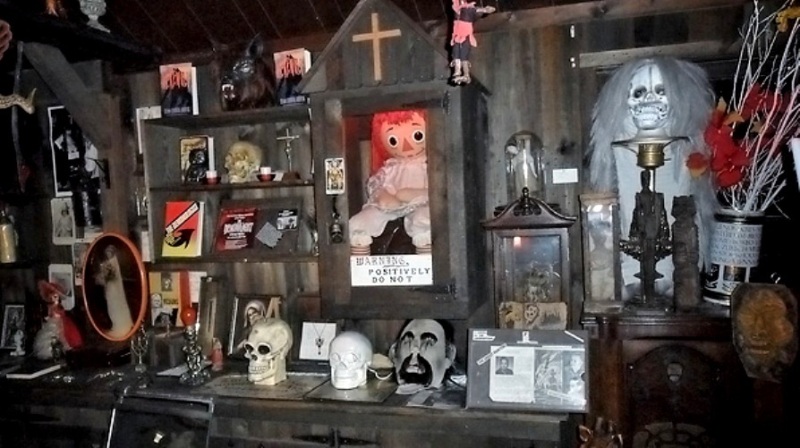 The real Annabelle displayed in the basement museum of Lorraine and Ed Warren.

I watched Annabelle with the idea that if you make a movie about a real life creepy doll, at the very least the movie is going to be wicked creepy. Which means that either I have become immune to creepy dolls or this movie REALLY wasn’t scary. Not quite sure how to test that without going to my mom’s house, so I am going to assume it just wasn’t a very good movie. Here’s how they WANTED you to think the movie went.

The reality, though, is a lot less scary and makes almost zero sense. In Annabelle, a young, Catholic married couple in the late ’60s are awaiting a baby while the husband goes to med school (for no reason). He decides to give his wife the titular doll as a present because it completes some collection she has. And then the one interesting turn the move has comes into play: usually when there is a haunted or possessed object in a movie (like the mirror in Oculus), it comes to you with the monsters already in it.  But Annabelle, while horrifyingly ugly, was not evil when our heroes got it. It GOT evil as an offshoot of a very nicely filmed attack by some crazy cultists in the neighborhood. I know that sounds dumb, but it is one of the few things that makes sense in the movie, and the whole sequence is pretty good.

Usually the second act of these kind of movies is the haunted person trying to get people to believe them and no one does. In Annabelle, pretty much everyone believes the wife right off the bat. Husband is down with the concept of a demon. The bookstore owner, Alfre Woodward, knew she was haunted pretty much before she did. And the priest they go to doesn’t even bat an eyelash.

The problem is, even though they’re on board with the doll being possessed, all the characters seem sort of incompetent and can’t hatch a very good plan.  If you have a doll that is letting a demon into the regular world, why not burn up the doll? Why put it in cars and try to bring it to churches (which they do)?  Why not mail it to the White House?

(OMG can you imagine?  If you just mailed a demon doll to the White House, they would have to lock it up and the Secret Service would get all up in it and then the demon would be slithering around trying to get Obama and Joe Biden.  Someone remind me to do a Kickstarter for that movie.)

Anyway, in THIS movie, the whole thing becomes pretty goofy and the peril is the least perilous peril that I ever saw…periled. *SPOILER* The demon gets a soul. Which sort of makes me wonder why demons go to such trouble to try to get souls. If I were a demon I would just hang around in opium dens and on the railing of the Golden Gate bridge. Scoop up souls all day LONG doing that. And you wouldn’t need to waste all your time inhabiting dolls and scaring people. It would make at least as much sense as the plot to this movie.