Home › Art & Inspiration › Oddities › It Was His Devil Twin: The Peculiar Tale of Edward Mordake

It Was His Devil Twin: The Peculiar Tale of Edward Mordake 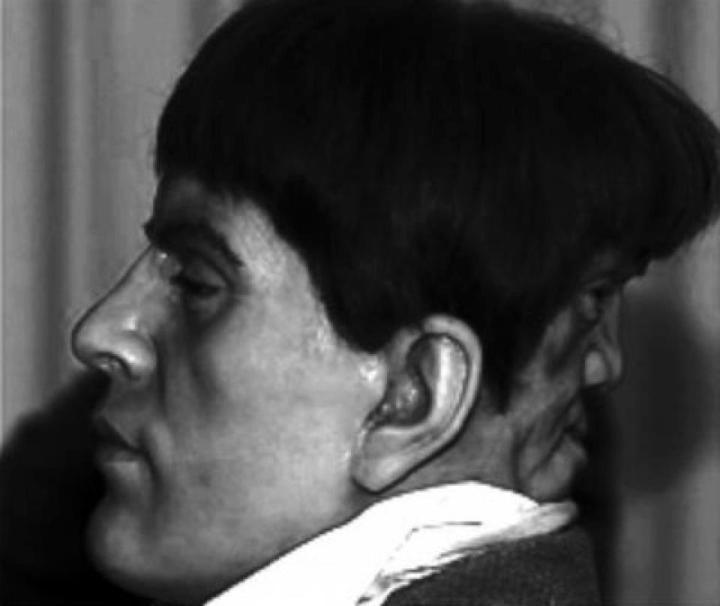 The above black and white picture has been making the rounds of social media lately, a startling image of a man with two faces, one handsome, one wizened. The image is occasionally accompanied by text that purports to tell the odd tale of Edward Mordake (or Mordrake), an attractive and talented young man with craniofacial duplication, a rare congenital disorder in which parts or all of a face are duplicated. The story purports that Edward’s diprosopus twin had a sinister secret, that it whispered things of such horror to him that he turned to suicide at the age of twenty-three. Surely a story so unsettling must be a modern fabrication: take one part urban legend, two parts creepy pasta, and bake on the internet til bubbling. Surely it is untrue…yet references to poor Edward go back more than 100 years, and in fact contain details that would raise a chill in even the most jaded of modern readers.

The first known reference to Edward Mordake dates to 1900, when it appeared in the turn-of-the century illustrated Anomalies and Curiosities of Medicine, “an encyclopedic collection of rare and extraordinary cases, and of the most striking instances of abnormality in all branches of medicine and surgery, derived from an exhaustive research of medical literature from its origin to the present day.” It reports Edward’s case not as medical fact, but notes that the tale is so well known as to merit inclusion in this scholarly text: 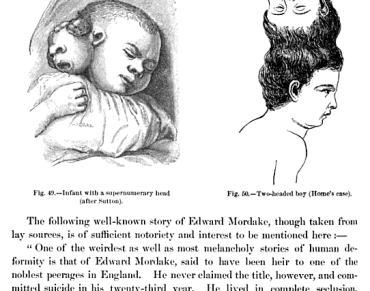 “One of the weirdest as well as most melancholy stories of human deformity is that of Edward Mordake, said to have been heir to one of the noblest peerages in England. He never claimed the title, however, and committed suicide in his twenty-third year. He lived in complete seclusion, refusing the visits even of the members of his own family. He was a young man of fine attainments, a profound scholar, and a musician of rare ability…his face – that is to say, his natural face – was that of an [Greek hero]. But upon the back of his head was another face, that of a beautiful girl, ‘lovely as a dream, hideous as a devil’.

As the story unfolds, the details have all the chilling flair of gothic horror so popular during the 19th century Romantic era, marked by authors such as Mary Shelley and Edgar Allen Poe.

The female face was a mere mask, ‘occupying only a small portion of the posterior part of the skull, yet exhibiting every sign of intelligence, of a malignant sort, however’. It would be been seen to smile and sneer while Mordake was weeping. The eyes would follow the movements of the spectator, and the lips ‘would gibber without ceasing’. No voice was audible, but Mordake avers that he was kept from his rest at night by the hateful whispers of his ‘devil twin’, as he called it, ‘which never sleeps, but talks to me forever of such things as they only speak of in Hell. No imagination can conceive the dreadful temptations it sets before me. For some unforgiven wickedness of my forefathers I am knit to this fiend — for a fiend it surely is. I beg and beseech you to crush it out of human semblance, even if I die for it.’ Such were the words of the hapless Mordake to Manvers and Treadwell, his physicians. In spite of careful watching, he managed to procure poison, whereof he died, leaving a letter requesting that the ‘demon face’ might be destroyed before his burial, ‘lest it continues its dreadful whisperings in my grave.’ At his own request he was interred in a waste place, without stone or legend to mark his grave.”

Although no historical Edward has ever been identified and the type of birth disorder described would be extremely unlikely, the terrifying tale has continued to linger in the public consciousness like a fever dream, driving artists and popular attractions to create wax statues and models inspired by Edward’s story (possibly the source of the photograph now making the rounds on the internet). As recently as 2002, Tom Waits recorded a song based on Edward Mordake, Poor Edward, here stop-motion animated by Lucas van Leiden.

Why has this story remained so popular, causing generations to lose sleep over the corrupt mutterings of a demon twin? Perhaps Edward evokes echoes of older beliefs; Janus, the double-faced Roman god of of beginnings and endings, a figure looking to the future and the past, keeper of real and metaphysical passages, gates and doorways. Or perhaps it is simply the salacious chill created by those Romantic horror themes of beauty, youth, and aristocracy pulled down to death, tragically defiled by evil and decay. Whatever the reason, the bizarre tale of Edward Mordake certainly demonstrates that the creation of a terrifying urban legend is not the sole proprietorship of our modern era.

For more on Edward Mordake, visit the always-fascinating The Human Marvels or check out Medchrome Magazine’s medical take on the tale. You can read a free copy of the 1900 tome Anomalies and Curiosities of Medicine in its entirety here via Google eBooks.

– Stranger Than Fiction: 10 Creepy Urban Legends Based on True Stories

– White as Snow and Red as Blood: The Art of Snow White

– And Mine Lippes Blaken: Five Medieval Medical Conditions That Made You Look Like a Zombie