Darlings, we are less than a week from Halloween and we’re counting down the top ten topical costumes of 2013! You can check out part one here, or read on for costumes six through ten (plus a few honorable mentions at the bottom, because we love costumes more than counting here at The Year of Halloween). If none of these float your Halloween boat, visit our archive of over fifty more makeup and costume tutorials, and don’t forget to submit your own 2013 Halloween costume photos for this year’s big Halloween Costume Contest! Now, on to the costumes!

6. Roaring 20’s Flapper – Baz Luhrmann’s decadent recreation of Great Gatsby this year wasn’t to everyone’s taste, but the costumes were undeniably fabulous, extravagantly lovely and louche, putting the Great Gatsby flapper on the short list for 2013 Halloween costumes. Although a fringed dress in a straight silhouette is the iconic flapper look, embellishments and beading where also popular in the era, giving DIYers and costume shoppers a lot of options to easily create a Roaring 20’s feel. For your costume, use the flapper dress tutorial below or visit Thinking Costume: Great Gatsby’s Flamboyant Flapper for 1920’s flapper makeup tutorials and additional costume inspiration. Pair with layered accessories such as looped strands of pearls, drop earrings, elbow-length gloves, and this DIY feathered hair clip. 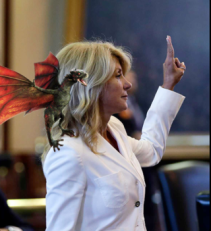 7. Texas Senator Wendy Davis – If you like your Halloween costumes of the inspirational variety, look no further than Texas Senator Wendy Davis. Going from a single mom living in a Texas trailer park to graduating with honors from Harvard Law School, Davis had already been earning accolades in the Texas Senate before she shot to international attention this summer with an eleven hour long filibuster to successfully block Texas Senate Bill 5. Although the bill eventually was passed in a special legislative session, the filibusterer called attention to the issue of women’s health care in Texas, set Davis up for a potential gubernatorial run in 2014, and launched a hundred “Wendy of the House of Davis” memes. For your Wendy Davis Halloween costume, simply pair a white or light-colored business suit with pink running shoes, as in this tutorial. Dragon optional.

8. Game of Thrones – Speaking of strong women and Game of Thrones, this show is another great source for Halloween costumes this year. With winter looming, costumes from Westros have the benefit of being more than warm enough for a chilly autumn evening, but who would shy away from the chance to be the mother of dragons? If Daenerys Targaryen is on your Halloween radar, use the costume and makeup tutorials below to create your own Khaleesi costume. Dragon entirely not optional.

9. Orange is the New Black – This Netflix-only series based on Piper Kerman’s memoir about her time in prison has been quietly racking up underground buzz and critical acclaim since its debut this year. With a colorful, well-written ensemble cast, Orange is the New Black has a lot of Halloween costume potential, especially for last minute or group costumes (or for those of you who prefer their Halloween costume in the “comfortable” category – scrubs and a t-shirt, anyone?). Simply pair scrubs in orange or tan (or a white chef’s coat for Red Reznikov) with a little makeup and accessories and you’re set. Visit PopSugar for a simple DIY costume tutorial plus a rundown on hair and makeup for each member of the cast.

10. Miley Cyrus – Oh, Miley Cyrus. Between her VMA performance and tongue-wagging antics in music videos and real life, Miley’s domination of pop culture this year will ensure you see at least some Miley Cyrus-related skin-baring shenanigans this Halloween season. While that wouldn’t ordinarily be enough to make a costume list here on TYoH, this fabulously tongue-in-cheek tutorial from Threadbanger for a Miley Cyrus Wrecking Ball Halloween costume, complete with tattoos, tongue, and wrecking ball, was too great not to include.

And there you have the top ten topical costumes for this Halloween, darlings! Of course, I must give honorable mention to two that didn’t make the list (but I know I will be seeing this year): The dancers from Ylvis’s What Does the Fox Say (for a costume, just pair a DIY fox hoodie or orange sweater and skirt/pants with easy fox ears and makeup, or white button-down shirt, masquerade mask, and fox ears), and the slightly more obscure (but my personal favorite) Ben Affleck Ruining Batman, simply achieved this Halloween with a Batman mask or cowl, Red Sox t-shirt, and Boston accent (the more over-the-top, the better) for a costume!

– Tutorials for the Top Ten Costumes of 2013: Part One

– You Did It in a Minute: 25 Last Minute Costumes