Home › Projects › Home Haunting › Absorbent and Yellow and Evil is He: SpongeBob Theme Song is Terrifying

Absorbent and Yellow and Evil is He: SpongeBob Theme Song is Terrifying

Kittens, I know a certain generation of you grew up loving Spongebob, that quirky porifera in short pants that first appeared to shape childhoods from under the sea in 1999. As delightfully innocent as Spongebob Squarepants and his aquatic pals appeared to be, leave it to the internet to decide that something more sinister might be at play. 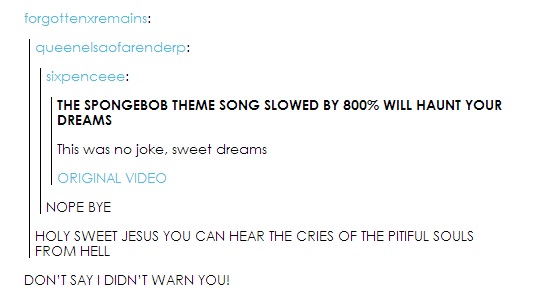 Yes, the theme song to Spongebob Squarepants slowed down 800% (didn’t anyone try 666%??) is, in fact, a horrifying mishmash of dissonant sounds and tones that could easily stand in as the soundtrack to the Russian borehole long rumored to be a gateway to hell. You might want to save this one to play on repeat for your Halloween home haunt – just don’t be surprised if you find yourself with a lot of leftover candy this year!

– The Beast Howls in My Veins: Love Songs for Monsters