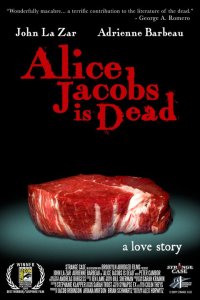 At the dawn of the zombie movie, the very idea of a shambling revenant was sufficiently terrifying to stand on its own in a horror film. In the first sixty of its history, the zombie story expanded to included the deeply contagious nature of the curse and the overwhelming tide converting the living to the dead, yet the core component of the horror remained the same – corpses risen from the grave with the sole intent of feeding on the living.  With the ubiquity of zombies in the last decade or so, however, storytellers have been forced to take a more nuanced, thoughtful approach. If we are so desensitized to zombies that they’re no longer intrinsically frightening, how do you recast the zombie story to bring it back around to properly horrifying again?

In Alice Jacobs is Dead, writer and director Alex Horwitz gives a clear answer to zombie film makers who come after him. In this 2009 horror short, we see the aftermath of an aborted zombie apocalypse, where Dr. Ben Jacobs has saved the world with a zombie anti-virus, but is struggling with the very human toll of losing his wife to the virus. As we learn that Alice Jacobs may not be as dead as we thought, we are subject to the pain of a loved one who still moves, looks, and acts like a human but is, at their core, dehumanized. With strong performances by John La Zar and the still-lovely Adrienne Barbeau, this film reminds us that there remains much yet to fear.. Enjoy!

(via Short of the Week)