Rise of the Zombie: A Killer Cocktail

During my recent trip to New Orleans, I was fortunate enough to attend a lecture by renowned cocktail historian Jeff “Beachbum” Berry on the fascinating history of the rise and fall of tiki culture, and the rediscovery of tiki drink recipes once lost to time. The epicenter of this tiki rebirth is the legendary Zombie, a cocktail so strong bartenders were once forbidden from serving more than two per patron. While that policy may have been more about creating a sense of demand than protecting incautious imbibers, with 3-4 ounces of rum per glass, a few too many could leave you shambling about like the eponymous living dead. So what could be better then using one of the classic Zombie recipes below for your next Walking Dead premiere party, this year’s Halloween soirée, or just an evening in watching Night of the Living Dead?

In the early 1930’s, Ernest Raymond Beaumont Gantt (aka Donn Beach or Don the Beachcomber), created the tiki scene nearly single-handedly from a little Los Angeles restaurant serving Cantonese-inspired food and strong rum-and-fruit juice drinks in a island-themed setting. Taking advantage of a newly-available gadget (the now quotidian blender), the alcoholic bite of his cocktails were mellowed by a quick icy whirl and the restaurant named Don the Beachcomber soon became the talk of Hollywood. Orsen Wells, Marlene Dietrich, Charlie Chaplin and other silver screen luminaries were frequent visitors, as were scads of tourists eager for a little rum-soaked tropical pastiche.

As the popularity grew, Donn began implementing a series of obfuscation techniques to protect his recipes from the surge of imitators cashing in on the tiki craze, a move quickly adopted by other tiki restaurateurs. While the attempts to control the tiki diaspora were futile, the careful encoding of recipes ultimately resulted in a loss of the original drinks as tiki started to die out in the 1970’s. By the 1990’s, most people knew only imitation recipes, sweet and syrupy ghosts of their former selves.

Enter Beachbum Berry, who began a quest to rediscover these lost recipes, with an emphasis on the Zombie, the drink that got tiki started. You can read the whole saga in his book, Sippin’ Safari, but after much painstaking research (and – I’m sure – sampling), tiki tipplers can once again indulge in a Zombie the way it was meant to be enjoyed. The recipe below is the Don the Beachcomber recipe from the 1950’s, as rediscovered by Berry. Don’t be intimidated by the length of the ingredient list – complexity is a hallmark of the tiki drink, but it is well worth it.

Combine all ingredients with ice in blender and pulse for 5 seconds. Serve in a tall glass and garnish with mint. Rediscovered by Beachbum Berry, originally printed in a 1956 edition of “Cabaret Quarterly” gentleman’s magazine.

For my advanced class, I’ve also added this slightly more challenging recipe, the one that started it all: the original 1934 Zombie cocktail. Before being replaced by pineapple and grapefruit juice, Zombies required a secret ingredient – the mysterious “Don’s Mix,” which Berry decoded as a 2:1 mix of grapefruit juice and cinnamon-infused simple syrup, giving this version of the cocktail a wicked little hint of spice. 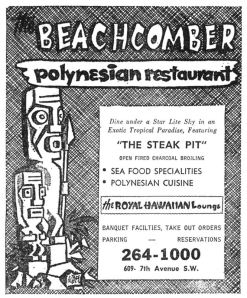 Combine all the ingredients in a blender, adding the ice last. Blend for 5 seconds. Pour into a tall glass and garnish with a mint sprig. Claimed to be the original recipe, recorded by Don the Beachcomber bartender Dick Santiago, rediscovered by Jeff Beachbum Berry.

Whichever recipe you decide to use, this is one Zombie that would be most welcome at any spooky gathering. Or say farewell to summer by throwing a tiki costume party with a luau theme – next week marks the 54th anniversary of Hawaii becoming a state! (Any excuse for a cocktail and a costume, am I right, kittens?) And if this all seems like too much effort, you can take advantage of the resurgence of tiki culture with events like The Hukilau and this weekend’s Tiki Oasis to let someone else do the work. All you’ll need to do is shuffle up to the bar and give them your best zombie moan. They’ll know just what to do.

For more on the history of the zombie and other tiki drinks, check out any of Beachbum Berry’s books. Wikitender has more historic Zombie recipes and, for all things tiki (including lovely vintage art and photos), visit Humuhummu’s Critiki or Tiki Central.

– How to Make Black Light Lemonade

Like Loading...
‹ My Body’s a Zombie For You, Baby Goose
Horror GIF of the Week: Stay Classy ›