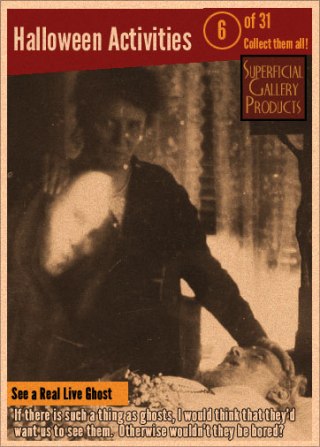 Ghosts don’t usually appear when the weather gets warm.  Think about it.  You ever heard of a haunted beach?  How about a hut?  Nope. Haunted places are usually rickety and cold.  Well, I guess except for the St. Augustine Lighthouse. That place is supposed to be haunted as hell.  As a matter of fact, back when I watched Ghost Hunters (before I learned the real story which I should totally tell you about some time) the episode they shot there was the most compelling (and least fakey) one I ever saw.

So that is ONE ghost in a warm location.  The rest are all in cold places. Minsk.  Maine.  Manitoba.  M is the letter of haunted places. Mausoleum.  See?  In fact, the only warm M place I can think of is Manila and I am not going to think of anymore because it will really hurt my theory. Michigan!

Oh, and in case you thought I was going to leave you hanging on the whole Ghost Hunters/St. Augustine Lighthouse thing, I offer you the whole episode below. But before you watch it, let me tell you how it works so you know what to skip and what to watch.  The things you should watch have asterisks.

Judge the ghost stuff on your own.  And if you decide that there is a ghost in the footage then congratulations.  You can cross this activity off your list!

Like Loading...
‹ I Myself Am Stange and Unusual: The Art of Maria Rubinke
Friday Night Features: “Reaping for Dummies” Short Film ›