A Stranger in the Looking Glass: Top 5 Tutorials of 2012

Darlings, if you are one of my dear regular readers, you know that we cover a vast and eclectic variety of topics here at The Year of Halloween. It has always been my fervent belief that the Halloween is not limited to one day a year where we roast pumpkin seeds or throw on a costume for an hour or two. Rather, it is an embrace of fantasy, both dark and light, a celebration of slipping into another skin for a moment, a welcome to all those things that inspire and terrify us all year long. When it comes to the most viewed posts here on TYoH, however, costume and makeup tutorials consistently receive far and away the most traffic, with the five posts below topping the list for 2012. 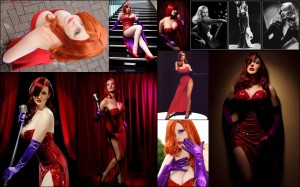 This post, featuring that iconic bombshell redhead voted sexiest animated character of all time, served up a collection of the best amateur and professional Jessica Rabbit cosplayers on the web. This gallery of gorgeous cosplayers was accompanied by a review of the historical roots of the character in 1940’s sirens like Veronica Lake and Rita Hayworth, how to create your own Jessica Rabbit look, and a variety of options for hair, makeup, and accessory styling.

In 2012, we featured a number of grisly FX makeup tutorials, from gouged eyes to werewolf attack wounds. However, this ghastly, ebullient evil clown is without a doubt my pick for creepiest makeup tutorial of the year. Based on the regular traffic to this post, I would venture to guess that my TYoH readers agree.  *shudders*

Originally published in 2011, this post explored the mythological basis for a beautiful, “fair-cheeked” Medusa, a woman bearing a terrible curse, but assured in her power and beauty. Along with its follow-on post, this edition of Thinking Costume included a discussion of “closet costumes,” dress and accessories, a variety of Medusa hair and make-up tutorials, and a review of potential companion costume looks, from a crumbling statue to the full Olympian panoply. 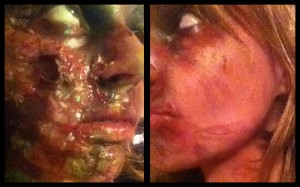 Without a doubt, 2012 was the year of the zombie. Whether you lean towards the speedy rage zombies of 28 Days Later or the shuffling, rotted corpses of Thriller, some basic FX make-up techniques are all that’s required to take your look to the next level. This post featured a collection of tutorials, including applying liquid latex, how to make and use homemade prosthetic gel, and a combined technique by Greg Nicotero and Andy Schoneberg of The Walking Dead.

Another Thinking Costume piece, the Spider Queen is a celebration of dangerous females; dark, deadly, and mysterious. Pairing a stunning makeup tutorial from MissChievous with a variety of fashionable ensembles from my Polyvore gallery, this look was the perfect choice for anyone dressing to kill last Halloween.

Other popular costume posts of 2012 included vintage circus and vamp tutorials, last minute costume ideas, and impossibly cute kids in Halloween costumes.  I truly hope that my 2012 readers found some inspiration here last Halloween and are sticking around for the ride to Halloween 2013. To my newer readers, welcome, and happy haunting!

– While These Visions Did Appear: Fairy Costume and Makeup

– She Was a Red Hot Hoochie-Koocher: Betty Boop Makeup Tutorial